Showing posts from 2020
Show all

Owen on the Trail

Owen, ready for a trail ride. "Owen has shown a tremendous draw to the horses during therapy time,” Margie Benge, of Triangle Therapy Services, wrote me when she recommended him for a Jacob’s Fund scholarship. When we met Owen in late October, nothing could have been more obvious. Once his mom, Amanda, had helped him out of his seatbelt, Owen made straight for the barn and his horse, Dusty. When he slowed down long enough for introductions, he smiled, waved, said hello, and then quickly returned his attention to Dusty. We understood – Jacob felt the same way about his horse, Major.   Fall hippotherapy is all about pumpkins! One of the most rewarding parts of our work with Jacob’s Fund is meeting the children and their families. They remain in our hearts, and we love sharing their stories. Amanda and Josh, Owen’s parents, have four children. This afternoon, Owen’s twin brother and little brother accompanied him to hippotherapy. They played on the playground while Owen rode Du
1 comment
Read more

A Treat to Watch: Dalton’s Hippotherapy 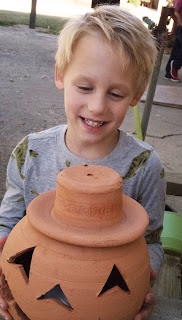 Dalton and Jack O'Lantern. Dalton’s five. When we meet him at Triangle Therapy Services shortly before his birthday, we are dazzled, not just by his delightful smile, but also by his dimples!  Joy radiates from this little boy. He picks up the jack-o-lantern at the entrance to the barn and holds it in front of his face and urges Bernie to take a photo of him. He giggles when his horse starts to trot - and we do, too! He grins triumphantly as he completes each task his therapist assigns him.   Dalton was born with spastic diplegic cerebral palsy. He’s been in therapy all his life. This summer he underwent surgery and therapy was interrupted while he recovered. Now he’s in intensive therapy and, under blue October skies, surrounded by the rich golds and reds of autumn trees, he’s back on a horse and loving it.  When You've Found the Pumpkins! Therapy, including hippotherapy – using the horse as a therapy tool – is hard work.  Dalton works at strengthening his core, balancing
Post a Comment
Read more 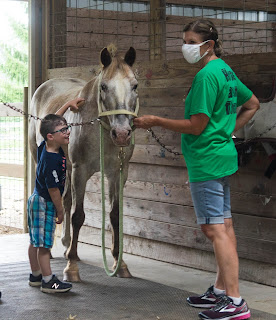 Corbin grooming his horse We met five-year old Corbin,and his mom on a beautiful Thursday evening in the serene countryside in southwestern Ohio that Triangle Therapy Services calls home. As Corbin prepared his horse for the session – helping taking the horse from the stall, grooming him, completing all the necessary steps, we watched him carefully follow the pictured directions in order while we talked with his mom. Corbin had been up since 6:30 a.m. and spent the entire day undergoing a series of tests at a hospital almost two hours from home.   Mom said she could tell he was tired, but at 8:15 p.m. he had completed dozens of exercises his therapist had designed for him, including doing sit-ups and holding his hands in the air – all while balancing on the horse, laughing and smiling.   And he still had enough energy to play on the swings and the slide in the playground when hippotherapy was over. Therapy = fun on a horse This lively little boy fi
1 comment
Read more

Miller, Back in the Saddle 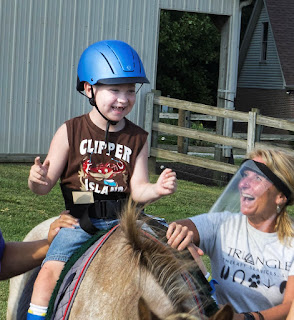 Miller, all beautiful smiles We at Jacob’s Fund find getting to know the children we provide scholarships to and their families greatly rewarding. We have missed that these past few months During the months of Covid-19 closures, both our partner facilities, McKenna Farms in Dallas, Georgia, and Triangle Therapy Services in Eaton, Ohio, have been providing telehealth therapy while working hard to ready their therapy centers for in-person therapy. In June, both centers had completed modifications and put in place safety protocols, including mask-wearing and sanitizing procedures, so that hippotherapy and therapeutic riding could resume. So we were excited to meet Miller and his family at Triangle Therapy Services early this week to watch his hippotherapy session. “How will we recognize him?” we asked Triangle’s director, Margi Benge. “Well, he’s an adorable little blond boy,” Margi told us.   Miller with his speech therapy team She is so right.
2 comments
Read more
July 13, 2020

Jacob's Fund just earned a 2020 Gold Seal by adding information to our Nonprofit Profile on GuideStar. Now our community members as well as 10+ million GuideStar users can find in-depth information about our goals, strategies, capabilities, and progress. We’re shining a spotlight on the difference we help make in the world. Plus, we’ve provided fresh information to 200+ charitable websites and applications that use GuideStar data, such as AmazonSmile, Facebook, and Network for Good. What do you think?
3 comments
Read more
More posts