One of my jobs is talking with parents of children who are Jacob’s Fund “ridership” recipients.  My first contact is usually by phone.  I take that call in my office, not because that’s where the computer, paper, and pens are located, but because there’s a box of tissues on my desk.

When I’m talking with a mom or dad whose disabled child is walking, running, or talking for the first time as a result of hippotherapy or therapeutic riding that YOU provided, it’s likely to be a conversation that involves tears.  These families’ stories are part heartbreak, and much triumph and hope.

Today I talked with Sammy’s mom. 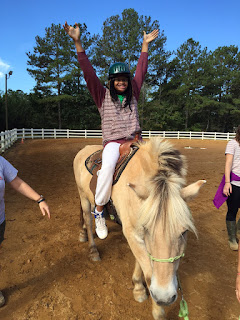 At birth, Sammy weighed one pound, seven ounces and was just twelve inches long.  Born at twenty-four weeks gestation, and without a cerebellum, tiny Samire didn’t have much of a chance.
But Sammy was a little fighter.  And he had a secret weapon:  a mom who will do anything to make life better for him.

It has not been easy. Sammy’s diagnosis, atopic cerebral palsy, is rare. People born without a cerebellum, the part of the brain that brain that contains about half the brain’s neurons, have difficulty with balance and equilibrium.  Sammy always feels as if he’s off-balance.  When he was learning to walk, the floor’s hard surface, far from making him feel surefooted, seemed to move dizzily beneath him.  So he learned to walk on a waterbed.

Sammy’s been in therapy for seventeen years, since he was a year old.  Since his developmental level was far below the bottom of the chart a special chart was created to mark his milestones. Today, his progress is measured on the “normal” scale.

Because Samire also suffers from audio neuropathy, a hearing loss condition in which a single word would have to be repeated five hundred times before he could understand it, his mom taught him sign language.  A few years ago, therapists had stopped trying to use sign language with him because “the general population doesn’t use it,” but Sammy had NO way to communicate.  Chanta, his mom, was very distressed that no one was making an effort to help him speak.

In all those years of therapies and IEPs, nothing compared to the progress Sammy has made at McKenna Farms with Melissa, his therapist.  From not being able to speak, Sammy soon learned how to make the “s” sound.  Then he could say his name!  From then on, Sammy has only gotten better and better.

Now he initiates conversations.  “It’s a miracle,” his mom says. We do everything McKenna Farms suggests for us.

“Sammy doesn’t look disabled.  You’d never know,” she says. “His whole life I’ve tried to make things better for him.  People at church ask me if they can pray for me and I say, no, pray for Sammy.

“Sammy sits up straight now.  His posture’s improved.  Melissa taught him to walk with pride.”

Here's a video that shows just how proud and determined Sammy is to be independent:

Sammy’s mom lost her income January 25th.  Knowing that the therapeutic riding sessions cost $60 per session, she didn’t know how she could possibly continue.

“And then there would be all that progress lost.  It would stop,” she says.

But for Jacob’s Fund, which is to say, but for you.  Because you care, because you think lives like Sammy’s are important Sammy and other children will have the opportunity to develop full, rewarding lives.

Time for you to stand up straight and walk with pride, just like Sammy.

Sammy‘s story is remarkable and moving, and it isn’t finished.  Jacob’s Fund is happy to be a part of it, and we know you are, too.  If you’d like to help Sammy and kids like him, you can send your donation to:

We welcome your gift.  Thank you. 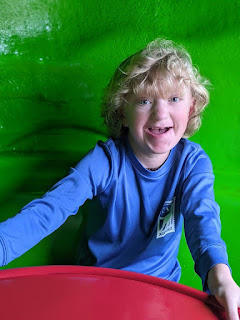