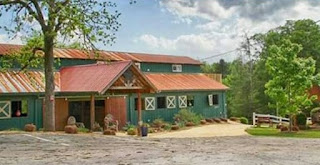 The Barn at McKenna Farms

You can’t say we weren’t warned. The day before our visit to McKenna Farms, We saw the Facebook post: Nigel, a baby goat, had arrived at the farm.

We pulled into the parking lot between school dismissal and dinner time, a very popular time slot. The parking lot was nearly full, and as we rounded the corner of the farmhouse, waiting parents and siblings filled the porches in the warm spring weather, though a number of families had drifted off toward the barn to see the new baby goat.

The last time we were here the new waiting room was nearing completion, piled with furniture. Now we take a look inside, where more parents wait for their children. We’re drawn to the striking painting on the wall, a farm, painted by the grandmother whose granddaughter comes to the farm for therapy.

Then, approaching from the barn, we saw some familiar faces: Melissa and her twins, Cameron and Landon, two sweet boys Jacob’s Fund had sponsored. The boys are taller now, and they have a baby sister who is hardly a baby any longer. Melissa and I hugged, and each of the twins met my gaze and greeted me.

The buzz around us echoed as everyone who passed by coming from the barn said to those going toward the barn: “Have you seen Nigel? You’ve got to see Nigel.”

Of course we had to see Nigel, too. 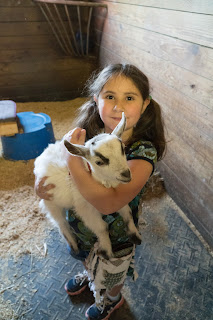 Charlie's little sister holding Nigel
We found him in a horse stall all his own. Jackson, Jessie’s older son, perched in the stall window, overseeing Nigel’s activities and visitors. Jackson has great plans for Nigel; he can’t wait to build a Nigel house. He held Nigel up for me to pet, and I was hooked on Nigel at that point: his sweet little face, his patience with all the humans popping around him like soap bubbles, his eager playfulness.

His space had been furnished with all the things a goat needed: hay to chew on as he learned to eat big-goat food (it also served as an edible sleeping mat), an incline propped on a hay bale so he had something to climb on, water, and toys.  He was surrounded by kids and adults petting him and watching him hop, climb, and gently butt his head against the forest of legs in the stall. While we were there, McKenna Farms’ vet stopped by to give advice on when six-week-old Nigel could stop taking milk from a baby bottle every eight hours (a volunteer has been working the night shift to keep Nigel well-fed) and begin solid food. We were every bit as enchanted with this little goat as the children were.

Over the next day and a half, we were to learn that Nigel, a whiskered furball not much bigger than a large cat, was already unwittingly starting to earn his keep.

Jacob H. and his mom 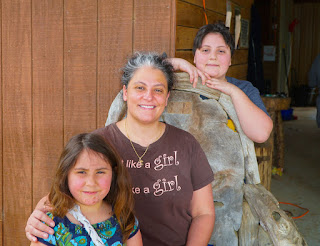 Charlie, behind his mom and little sister

Our appointments the next day were with Jacob H. and his mom, and Charlie and his mom. By the time we caught up with Jacob H. and Misty, they’d already visited Nigel, and Jacob broke into a smile when Nigel’s name was mentioned. Charlie and his sister, Sarah, too, had visited Nigel before his therapeutic riding session.  After talking with the family, Sarah and I found ourselves back at Nigel’s stall, where she ducked inside to get some hands-on goat time.  I made sure the stall door stayed latched as the parade of visitors continued.

That afternoon Jonah and Amy stopped by. Jonah was clearly enamored. “Goat, goat,” he said, pointing in the direction of the barn.

One-on-one therapy is very important to a child with developmental impairments, so much so that social development is often overlooked, or regarded as incidental, a byproduct of being in the world with others. But social interactions are important to our emotional and mental health, whether we are adults or children.  Kids’ social groups can help model good social behaviors, and allow children to see how what they do or say affects others.  They learn how to cooperate for a better outcome.

And here is Nigel with friends in a cooperative play activity that . . . well, take a look (that’s Jonah on the left): 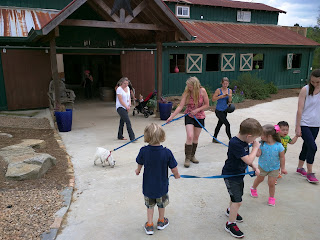 Taking Nigel for a walk
Need I say more?

Watch this space for more about Jacob H.  and Charlie, coming soon.
We welcome your questions and comments about Jacob’s Fund and hippotherapy and therapeutic riding.
We’re pleased you’ve visited our blog and we hope you will be inspired to contribute to the scholarships Jacob’s Fund provides for children with developmental impairments. You can reach us at:

Posted by Glenna Lee Howell Fisher at 2:49 PM No comments: