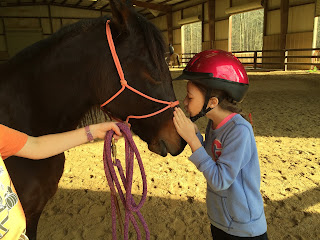 Isabella, kissing Gus
“How’s Isabella?” I ask her mom, Linda.  I met and talked with Linda and Isabella a few months ago, just after Jacob’s Fund began sponsoring Isabella’s therapeutic riding.  I remembered Isabella as a quiet little girl who clearly loved her therapy horse, Gus.

“She’s progressing as a normal kid, very outgoing, she speaks her mind and has lots of common sense.  She’s healthy and happy,” Linda says of her daughter.

I feel like cheering.  Isabella is autistic and struggles with a language disorder.  Speaks her mind?  Outgoing?  You go, girl!

Linda goes on to give me some examples.  At school recently, she cut her head, just a small cut, fixed with a Band-Aid, but it bled.  Isabella blotted some of the blood on the paper she was working on.  Her teacher was momentarily startled until Isabella spoke in a dramatic voice, “I am signing my paper in blood for you.”  She often displays that dry wit in class, the teacher tells Linda.

At home a few days ago, Isabella started a game with her dog, chasing him around the house to the theme music from “Jaws.”  “She’s a hoot!” Linda says.

This funny, spirited girl’s life began with a rough start. When Isabella was born, she’d already experienced a great loss: her twin was miscarried.  Linda, her mom, feared losing Isabella as well.

At age two she was diagnosed with autism and receptive-expressive language disorder. The doctors told Linda that Isabella would never talk and predicted she’d be very low functioning.

It was a sad, dark time, complicated by Linda’s divorce from Isabella’s father, an alcoholic and drug addict.  And Isabella didn’t talk for the first five years of her life.

Later, Linda remarried and moved to Atlanta, where she met Jessie, McKenna Farms’ Director.  From the first, Linda reinforced Isabella’s hippotherapy sessions with follow-up work at home.  She’s kept that up consistently.  It’s an important factor in a child’s developmental success. 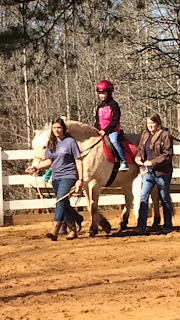 One of Isabella's hippotherapy sessions outdoors

Isabella’s bond with her horse is strong.  She falls forward on Gus’ neck as soon as she’s on his back, and hugs him.  “She wants to be all over him,” Linda laughs.

But as openly loving and interactive as she is with her horse, she’s still uncomfortable in social situations, especially with her peers.  Younger children and older people seem to be easier for Isabella to connect with; kids her own age – not so much.  One of her classmates seems to especially arouse her emotions – Isabella screams and cries when she sees him.  This is particularly upsetting to Linda, who wants her daughter to be able to adjust to life and handle situations like this.

All of this is occurring just as Isabella is on the cusp of adolescence, a time of hormonal changes and an almost-universal feeling of social awkwardness.  Isabella’s ridership from Jacob’s Fund has been especially helpful now, because one of the psychological benefits of therapeutic riding is improved confidence and self-esteem, enhancing social relationships, and improving coping skills.

“I am immensely grateful for this chance you’ve given us,” Linda tells me.
While Isabella still encounters hurdles, like the purple-haired boy in her class, she’s amazing those around her. She’s already developed a great coping skill: humor.  “She’s very high functioning and she’s funny.  She’s developed a sarcastic sense of humor,” Linda says. “She’s an absolute joy.”

Isabella, sugar and spice, moving quickly toward becoming all that she can be. Another reason why Jacob’s Fund does what we do.  We’re thrilled to help Isabella, and we know we can only do that with your support.  Thank you.

Posted by Glenna Lee Howell Fisher at 10:14 AM